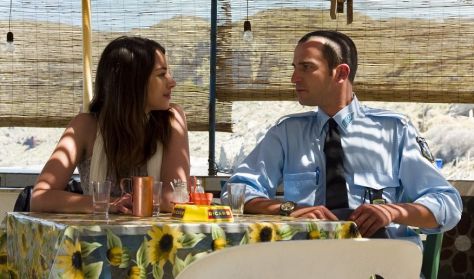 Small crime is set on a beautiful but ragged Greek island in the Aegean. Our protagonist Leonidas is a frustrated young policeman who has just been assigned here after his graduation from Police Academy and would much rather be in a hassling city than stuck on a sleepy island. He finds hope for action in the discovery of Zacharias body. Each person he talks to on the island has their own version to tell of how Zacharias died and through his unorthodox investigation Leonidas will get to know them all, fall in love, become part of the island them and in the end because of this solve the mystery of Zacharias death.

Director’s Statement
A Greek island, unique, beautiful and rugged. It’s characters, individuals, very human, and a little crazy. In this world comes Leonidas an outsider who would much rather be in the hassling city instead. With him we get to know the island and it’s people. First we see only the surface, the sleepy island, but once we get to know the people through the funny and earnest young policeman, and we soak up the beautiful landscape we become, like Leonidas, part of the island. The events of the film change Leonidas’ plans, just like on rare occasions you fall in love with the place so much that you change your return ticket, and stay a little longer, and a little longer…

In the pleasant surprises of the festival is “Small Crime” by Christos Georgiou a tasteful and full of humour film which is capable of wider audience appeal. The film could be titled, “Who killed Zacharias?” a reference to the Hitchcock film “The trouble with Harry”. Georgiou succeeds in creating a number of good, clever gags with his protagonist on his scooter getting clumsily tangled in various situations much in the style of a Greek Monsieur Hullot. It’s a pleasant film with a good rhythm, a comedy from which lessons can be learned from directors who wish to aim at the box office.

CYPRUS WILL SAVE US - TA NEA, 22 /11/ 2008 - Dimitris Danikas
“Small Crime” by Christos Georgiou: The only till yesterday Friday complete story of the Festival. With a beginning, middle and end. With humour sensitivity and real acting (Aris Servetalis, Viki Papadopoulou).

“Small Crime”: A pleasant surprise. NAFTEMPORIKI, 20/11/08 - K. MOYXIMOGLOU Sudden surprise was “Small Crime” by Christos Georgiou which shows that Greeks can also have a lighter spontaneous humour… Christos Georgiou makes us laugh from the first two minutes of the film, making us feel good during the whole film, where as well as laughter he makes social critique and creates meaningful messages. Excellent is the lead Aris Servetalis, and all the cast are very good in their parts

Christos Georgiou (Director/ Writer/ Producer) was born in London U.K. in 1966 by Cypriot parents. He grew up and completed his basic education in Cyprus. He received his bachelors degree from the University of Warwick in the U.K. After his graduation in 1989 he worked for a number of television and production companies in the U.K, Cyprus and Greece. In 1993 he completed his Master of Arts in Film Production, Direction at Leeds Metropolitan University in the U.K. In 1994 he was awarded a scholarship by the EU to study direction at the Polish National Film School in Lodz. His first feature film “Under the Stars” won the PRIX de MONTREAL for Best First Feature film in 2001. ‘Small Crime” is his second feature film.

General instructions for the audience:
Rialto Theatre operates according to protocols of the Ministry of Health regarding COVID 19. The audience is kindly requested to purchase their tickets in advance, either online (www.rialto.com, Rialto App) or by Rialto’s box office.